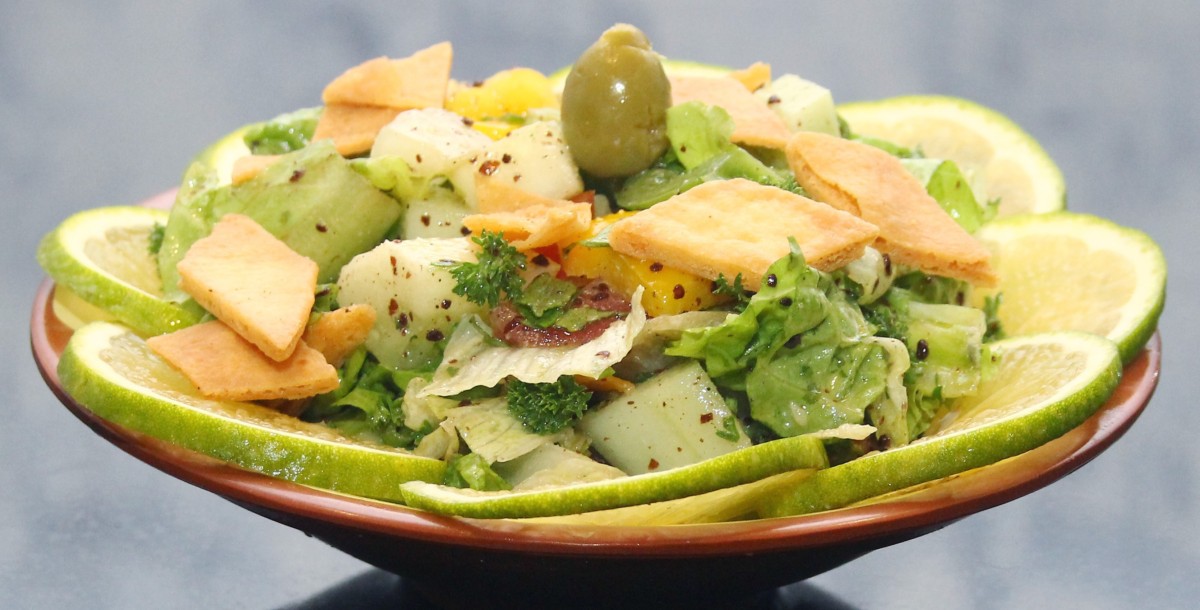 Last one to two years saw a lot of Arabic restaurants that have popped up all across Hyderabad. It was limited to the Barkas area in the old city initially but slowly found its way to different parts of the city and continues to grow more and more each day.

While the food might look appealing, your experience might take a hit if you are unsure of what you need to order if the waiter is unable to explain what the dish is all about. This article is my attempt to assist fellow foodies in understanding few common dishes that are available in the restaurants these days.

Fattoush: A colorfully tossed Lebanese salad made with toasted or fried pieces of pita bread combined with vegetables. The combination of lemon and sumac gives the dish a tangy & sweet taste

Baba Ghanoush: A dish made of cooked or grilled eggplant mixed with tahini, curd & vegetables like tomatoes, onions, lemon, garlic, parsley etc along with olive oil. It is also called the egg plant salad.

Moutabel: Fried or Baked Egg plant is pounded and made into a puree with sesame paste and lemon juice.

Moroccan Hummus: Whole chickpeas are added to hummus which gives this dip a hearty, chewy texture. Here the chickpeas are sautéed with onion, tomatoes and spices for extra flavor. Few outlets add small barbecued pieces of boneless chicken on top while serving it

Tahini:  Primarily used as a sauce or as a paste which is added to Hummus, Baba Ghanoush and also to many non-veg dishes as well, it is also served as a dip. Made from toasted and ground sesame seeds, it goes well with shawarma’s and souvlaki’s.

Stuffed Vine Leaves or Dolma: A Turkish dish where grape vine leaves are wrapped around a veg or non veg filling along with rice and herbs. Tangy taste and served cold you would have to eat is whole to avoid the filling from falling out 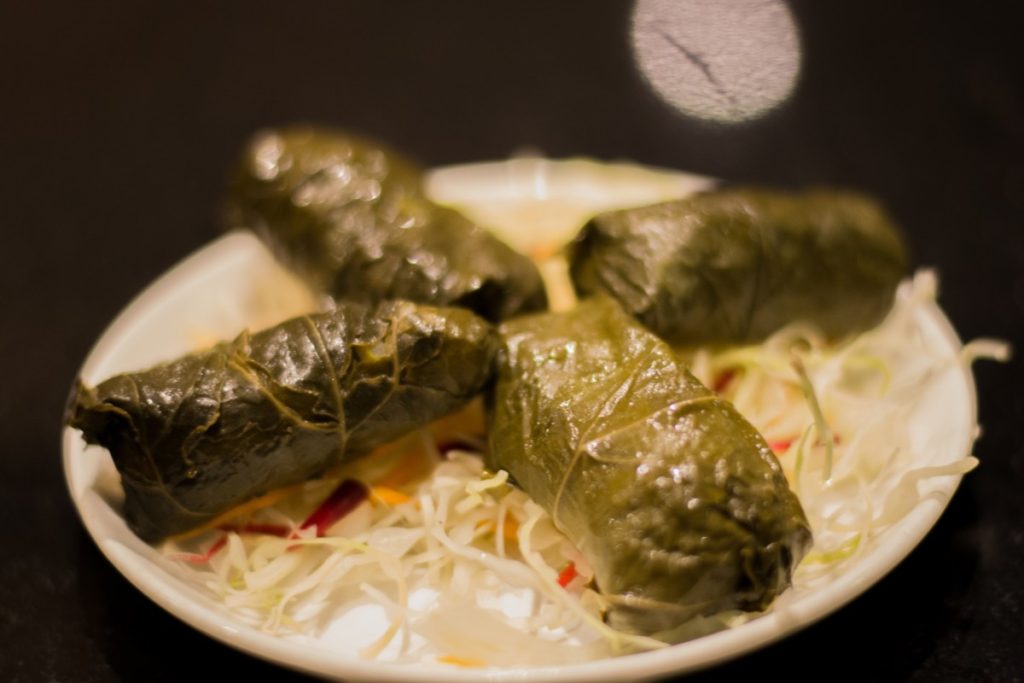 Batata  Mashwea: Charcoal grille sweet potato based dish which can be enjoyed with Pita bread 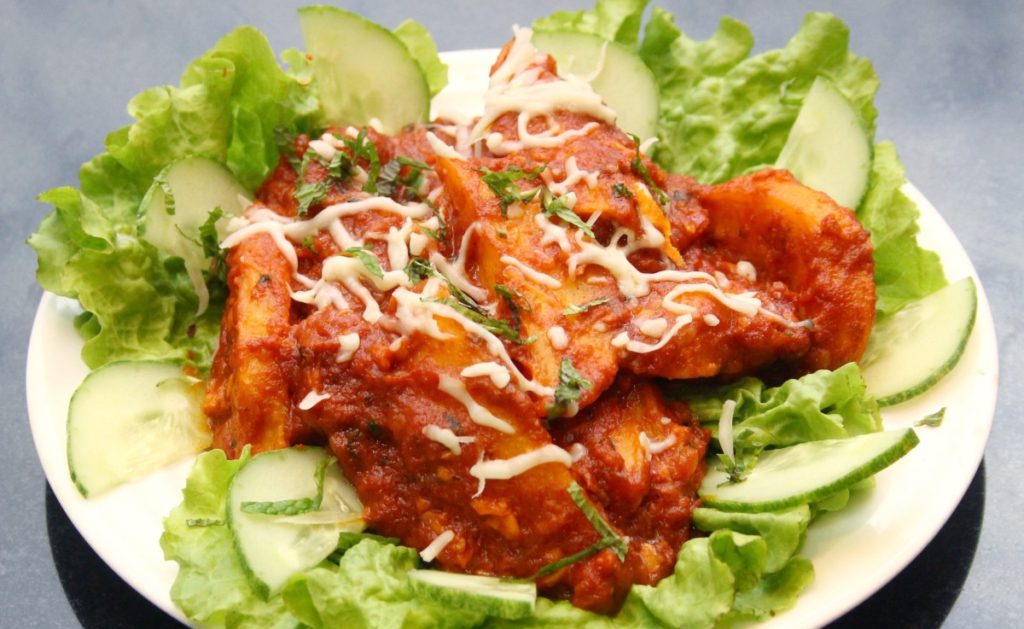 Dejaj Jawaneh:  Lebanese Grilled Chicken Wings, a chicken delicacy which is nicely marinated with lemon and garlic before being grilled, it is served with garlic sauce and pita bread. 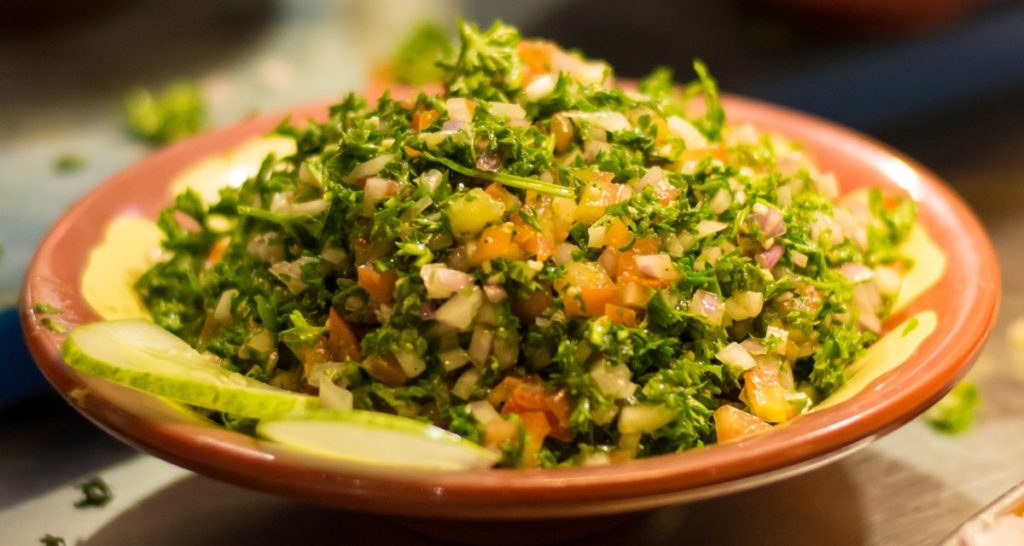 Za’atar: It is primarily a herb belonging to the Oregano family and used majorly in Arabic cuisines. The condiment is comprised of za’atar herb mixed with sesame seeds, dried sumac and salt. It is generously sprinkled on hot pita bread and served across

Sumac: Spice made from red berries which are dried and ground into powder and has a tangy lemony flavor looks like Indian red chilli powder in appearance but very mild in taste

Shattah: It means spicy or spicy sauce. Served with Arabic rice dishes to increase the flavor and spice accordingly. Made with Tomatoes, Peppers, Garlic and lot of other spices the spice levels can range from mild to very hot at different places. 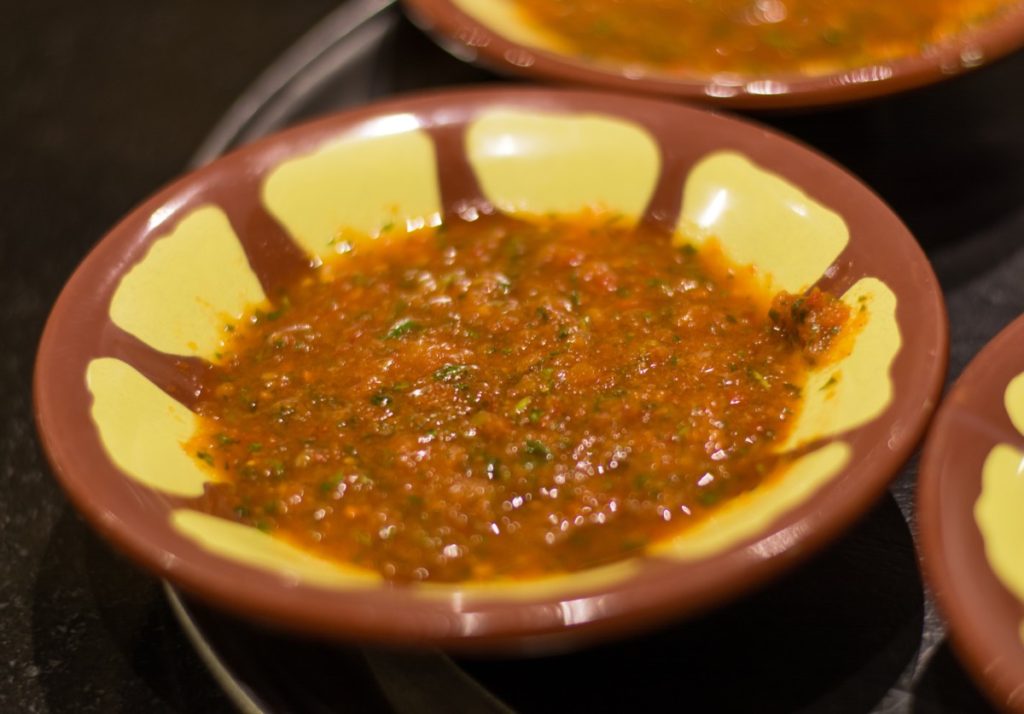 Pita Bread: Popularly known as Khoobus, Khubz etc is soft flat bread slightly leavened or puffed. Made from whole wheat flour they are available in White and Brown bread variants in the market. Shawarma meat is wrapped in it or this is served as an add-on to salads, starters or main course. 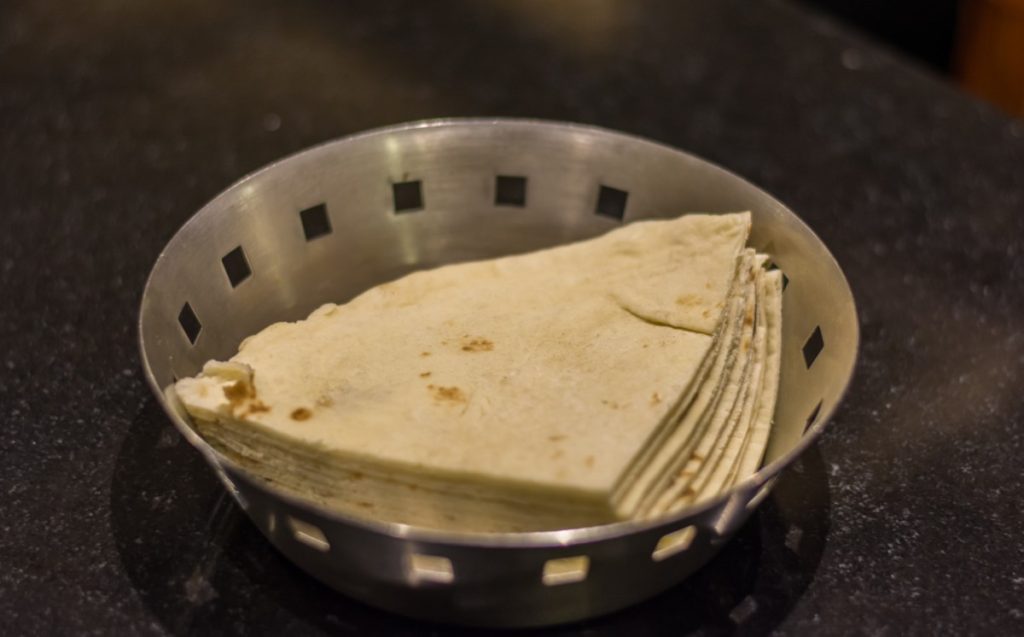 Saj: Rumali roti is the word that pops up immediately when you see this. Saj bread is a flat round bread baked on an upside down iron wok hot surface. 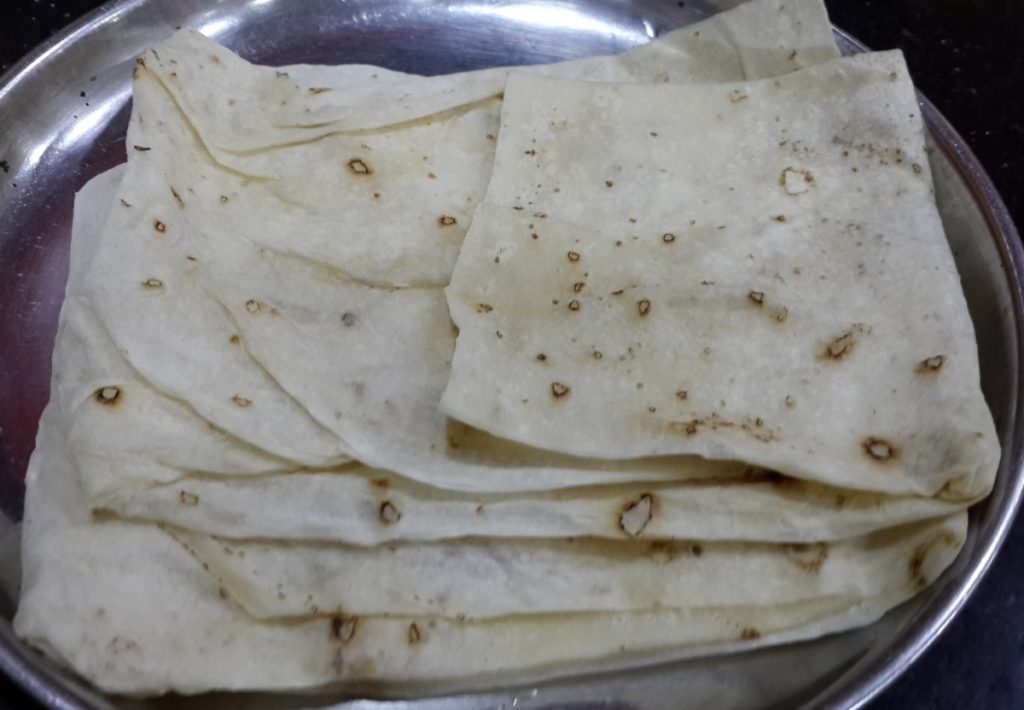 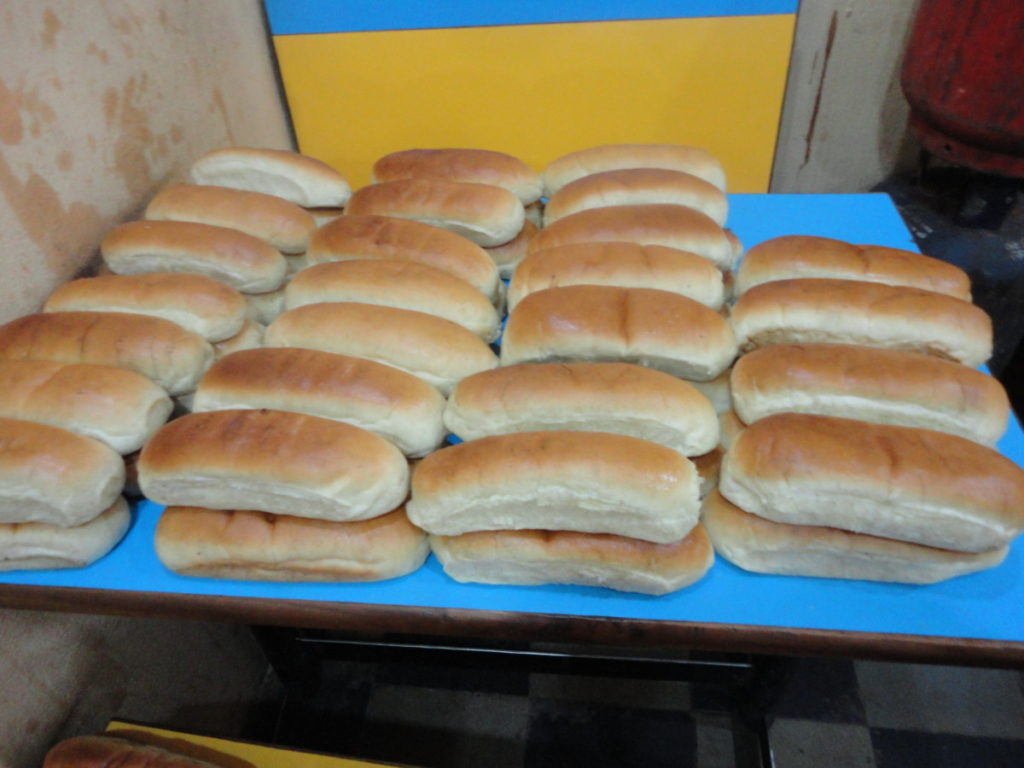 Pita Pockets: One of the popular variants of the pita bread is the pita pockets, due to the puffed up nature of the pita bread caused by the high temperature baking. The layers of dough remain separated and used to form pocket in which meat and vegetables are placed and served 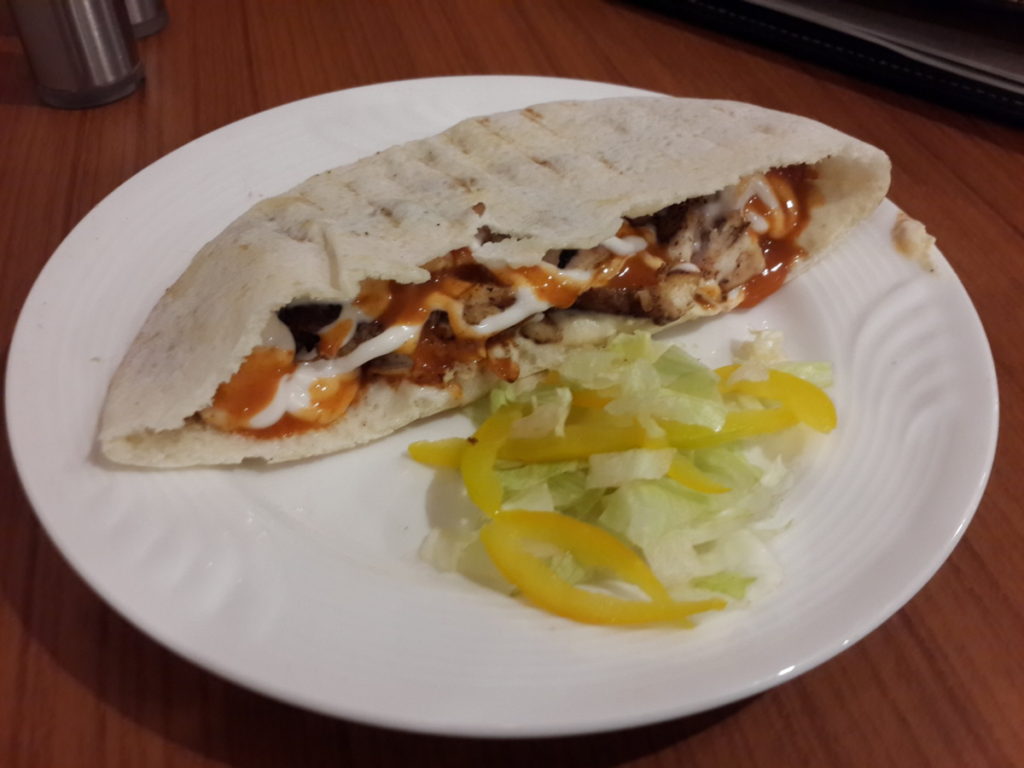 Shawarma: Meat cooked on a vertical rotisserie, traditionally it is supposed to be lamb but you would find beef and chicken variants as well. Thin slices of meat is shaved from the rotating cooked portion facing the hot grill and served with different vegetables and seasonings. 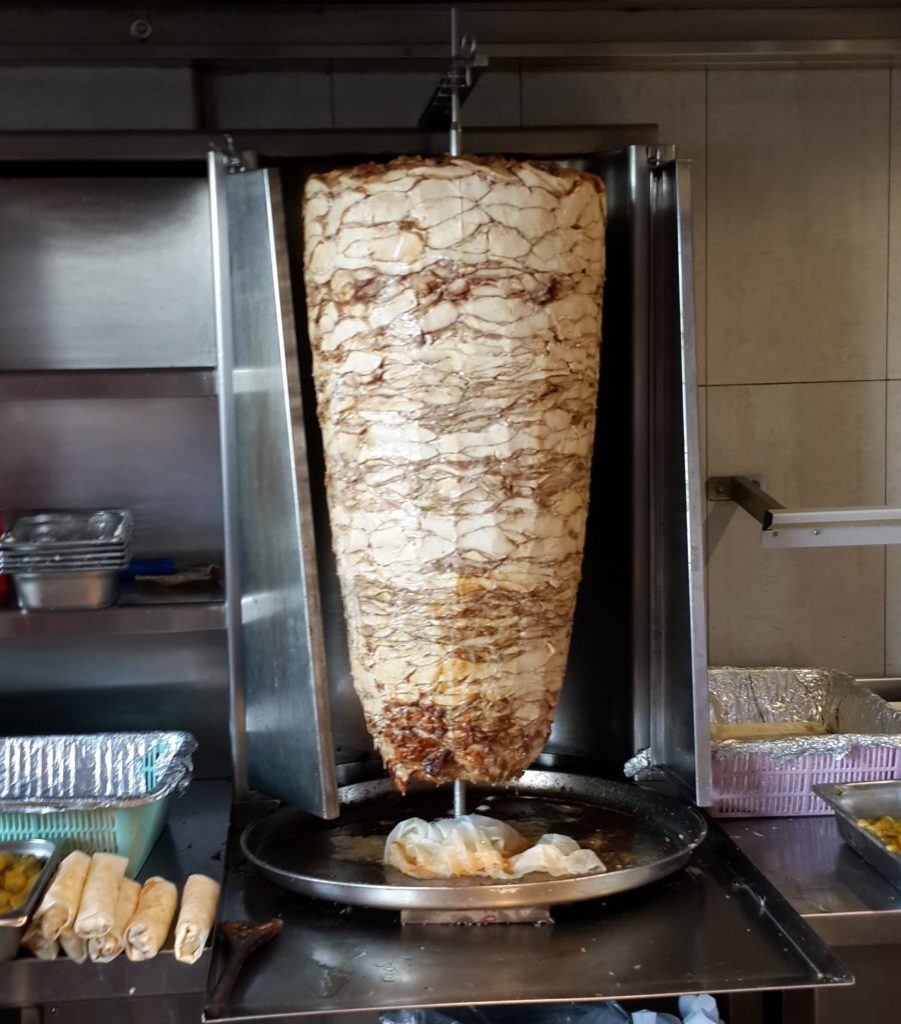 3 bread variants as options are provided to you at most of the places serving shawarma i.e Khuboos(Pita Bread) , Samoli/Samoon(Hot dog bun) or Saj(Rumali Roti)

Shawarma sahan:  It means a plate of shawarma – All the items that go into making a shawarma are given separately in a plate. 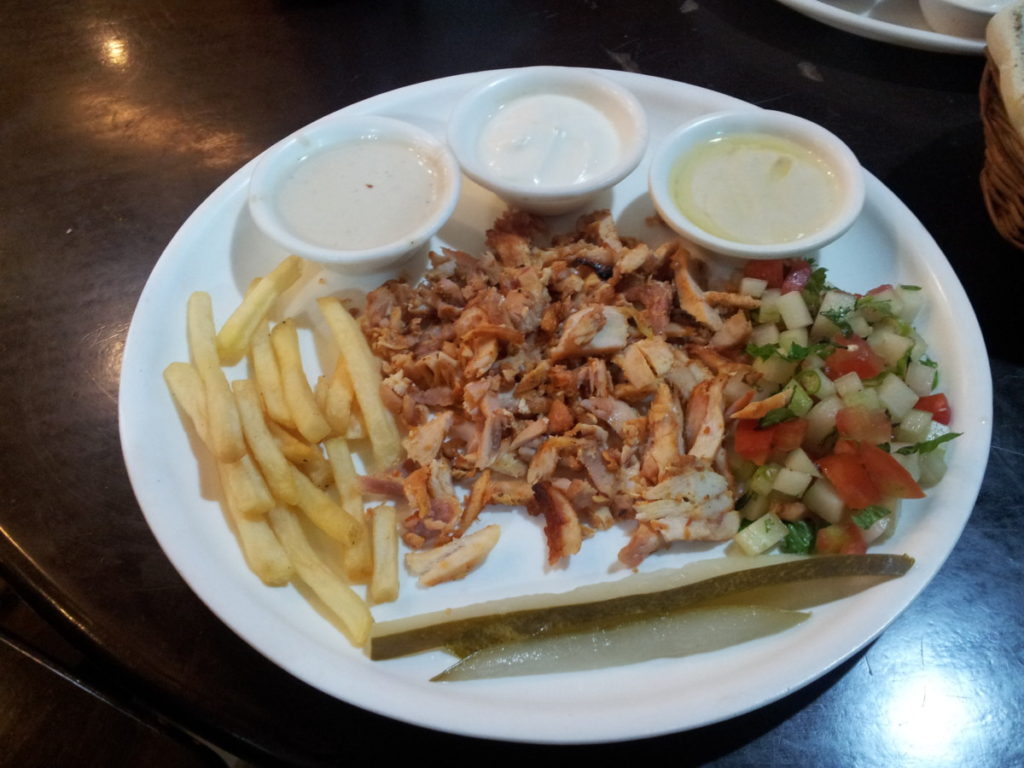 Arabic Shawarma: Shawarma meat is placed in Saj(Rumali roti) and then made crisp on the outside, it is cut into small pieces like spring rolls ad served with garlic sauce and pickled salad 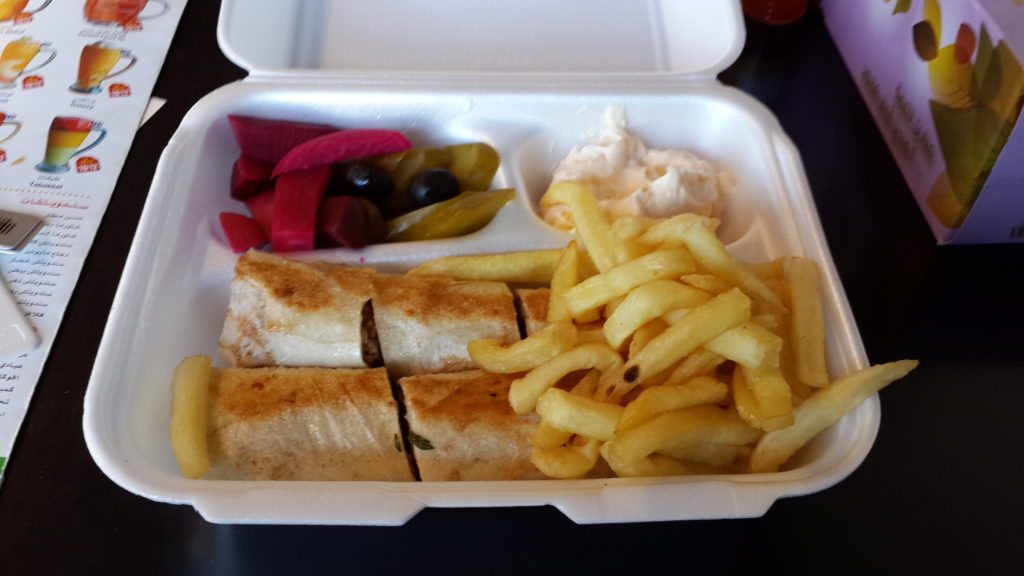 Falafel: A brown coloured patty or a deep fried ball made from grounded chickpeas (Chana dal) and Fava beans. They can be served as a snack, or served in a shawarma or a mezza platter. The falafel shawarma is one of the popular options for vegans who want to try shawarma and also for people who don’t prefer meat

Muttabbaq/Martabaq: Stuffed square shaped pancake or stuffed Arabic bread – Literal Arabic meaning of the name Muttabaq means folded. The stuffing inside is primarily diced meat with egg and vegetables. Vegetarian versions also available at few places which has bananas and other fruit variants as stuffing 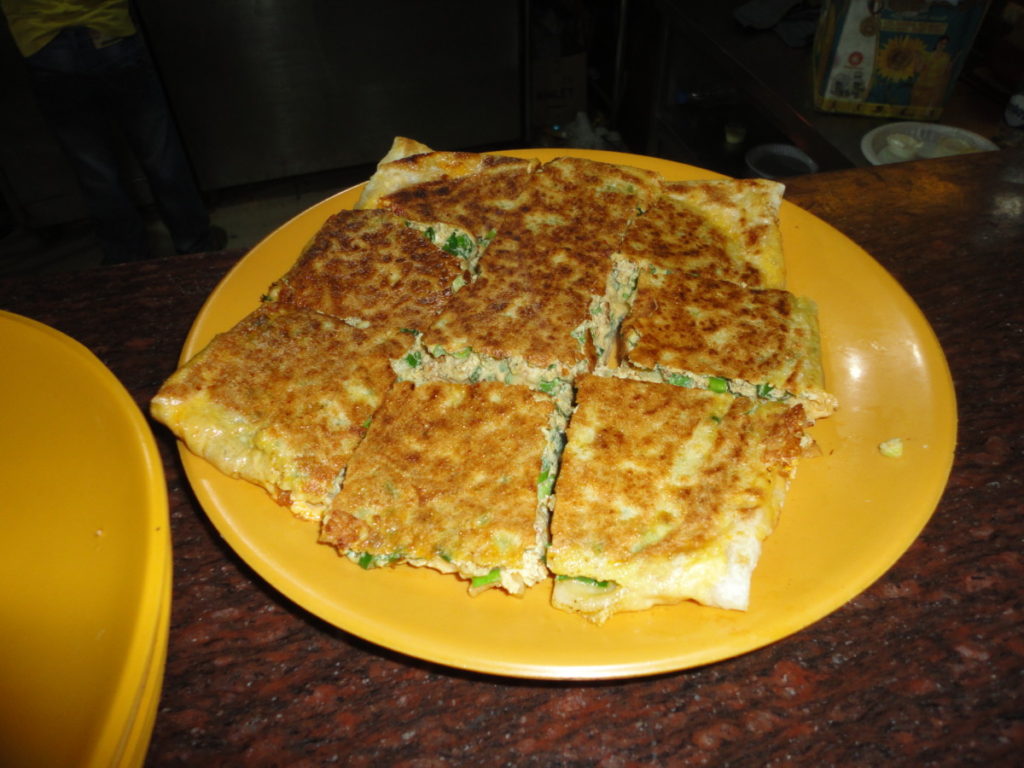 Faham/Al Faham : It means grilled or charcoal grilled chicken but you would also get mutton as well at different places. The chicken is marinated with Arabic spices and cooked over charcoal or against a flame. One of the healthy ways of eating as the fat tends to melt and fall off the meat

Doner Kebab: Turkish version of the shawarma but served primarily like kebabs in India. Few authentic places make these kebabs using a horizontal rotisserie where the meat is more crispier and well cooked due to smaller quantity on the rotating rod. Other variants include serving it with pita bread and vegetables, wrap style or sandwich style like the shawarma

Souvlaki’s : A greek fast food which sometimes features in Arabic menu’s and very similar to Shawarma’s . Small pieces of meat served with grilled pita bread but in a wrap. Open style is also available where the pita bread is served separately along with the meat, vegetables and sauces 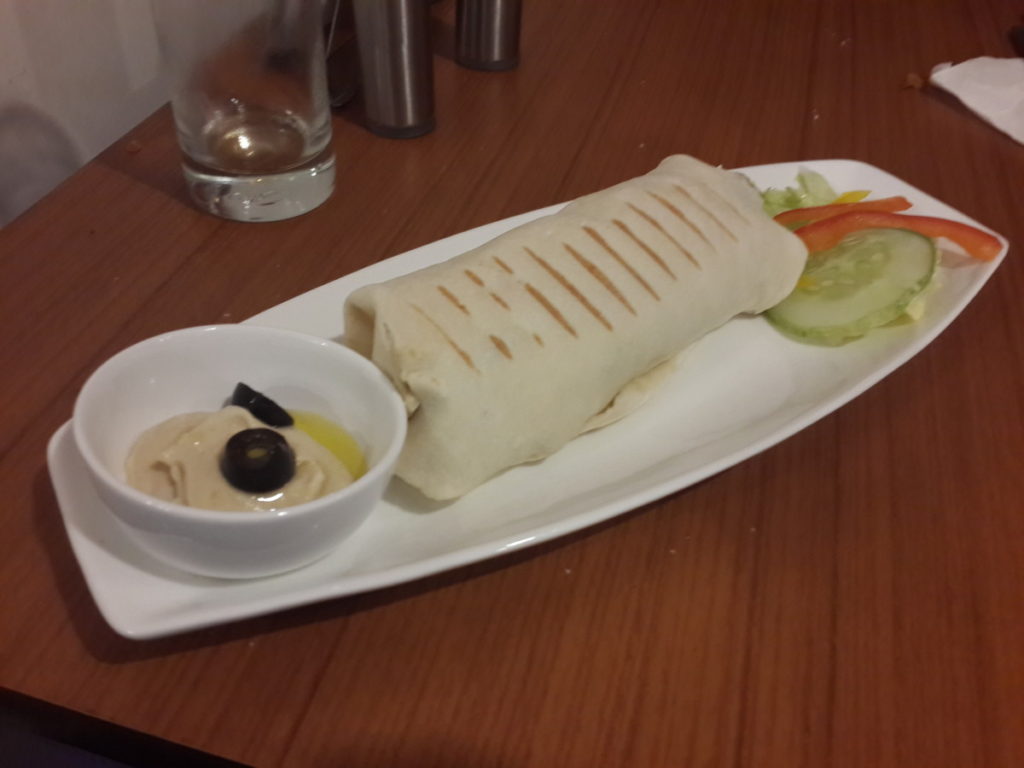 Mandi:  A popular Yemeni dish which is often compared to biryani by people in Hyderabad but it is very different from it. It is made of Rice, meat (Lamb or Chicken) and different Arabic spices. The meat is very dewy and soft and the reason of that is the preparation where it is made in a tandoor and has lots of charcoal. Care is taken to ensure that the meat doesn’t touch the tandoor or the hot charcoal . The traditional process of creating a clay tandoor to prepare the meat has given way to modern kiln for making it. The approximate cooking time is 4 hours in the traditional method and the modern style with various shortcuts does change the taste. For the rice Basmati or Long grain rice is used and addition of raisins and pine nuts give a different flavor to the dish altogether.  Chicken/Mutton Stock is also added on top of the rice to give an authentic feel and smell to it. Few styles of cooking also include cooking the rice using the meat stock water itself giving it a slightly sticky texture. 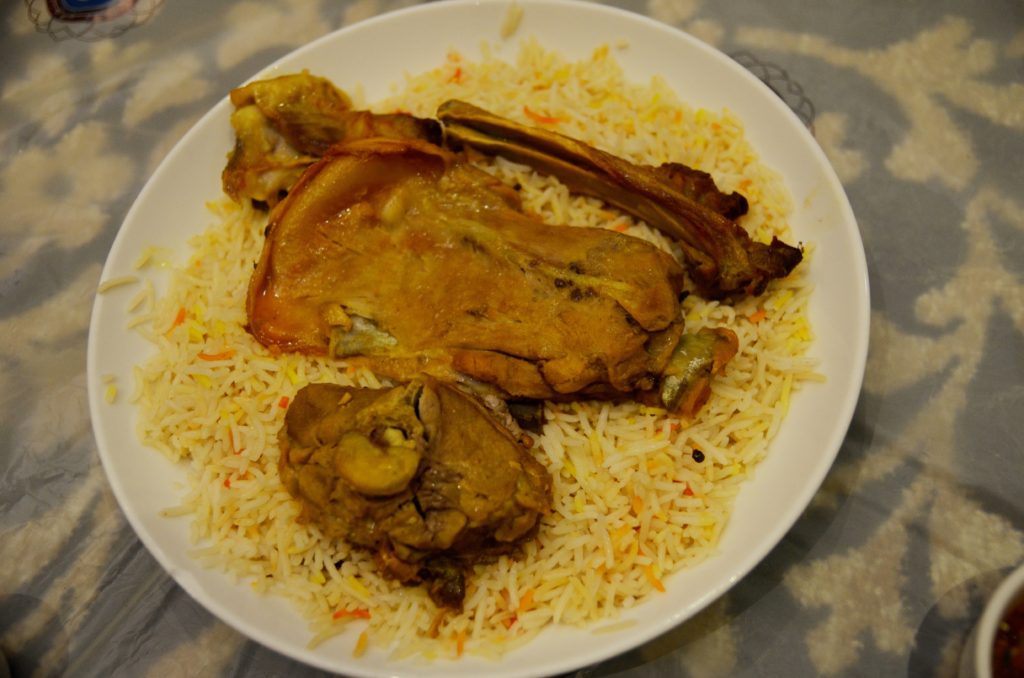 Khabsa:  A popular dish which originated from Saudi Arabia and has similar method of preparation as Mandi but additional spices like black pepper, cloves, cardamom, cinnamon, black lime, bay leaves, nutmeg are used in its preparation. Saffron and tomato puree gives the rice its signature red hue. Presence of raisins makes this rice a little sweet. It is served with Shattah (spicy sauce) to increase one’s taste accordingly

Madfoon: (Madfoon means buried) , It’s a slow cooking process where a piece of chicken or lamb is wrapped in an aluminum foil and placed in a pit and then covered with coal.The pieces of meat is the most tender that you can ever get in this cooking process 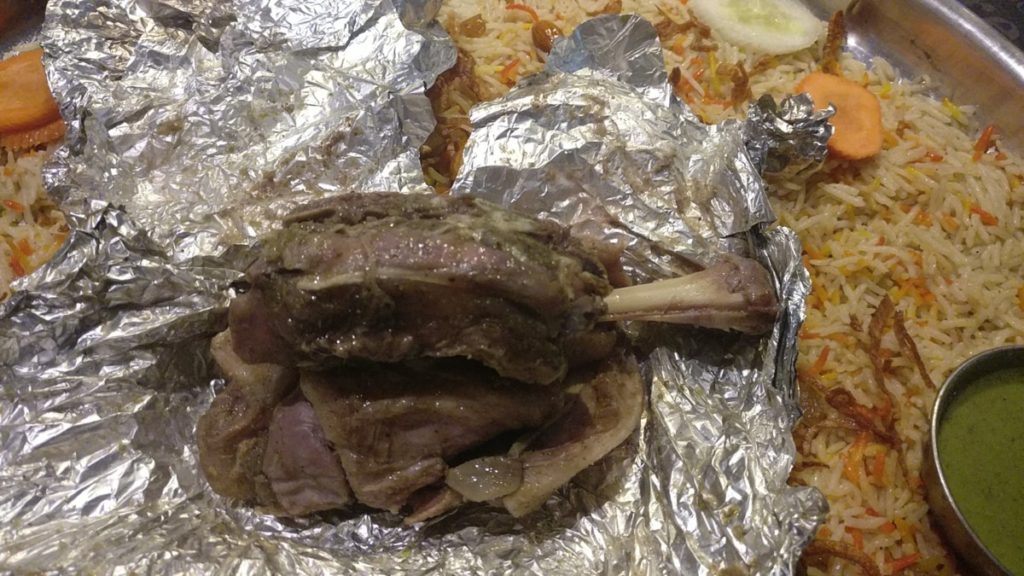 Zurbian: – Rice which is very similar to biryani as majority of the ingredients are the same and it is said to be influenced by Indian biryani but few changes seen as potato has been added as one of the main ingredients

Kunafa: A cheese or cream pastry with semolina and pista with sugar syrup. A very tasty and sweet dessert which is very popular across the arab countries 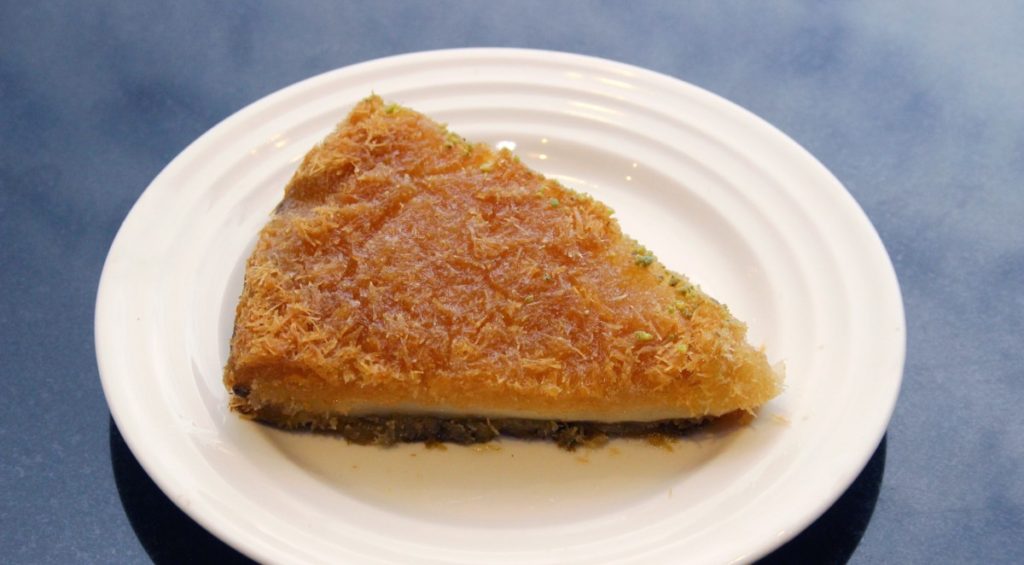 Umm Ali: a popular dessert originating from Egypt , also known as bread pudding . It is an almond semolina flour cake with pistachio, cinnamon topping. Raisins & coconut powder are also added at many locations. 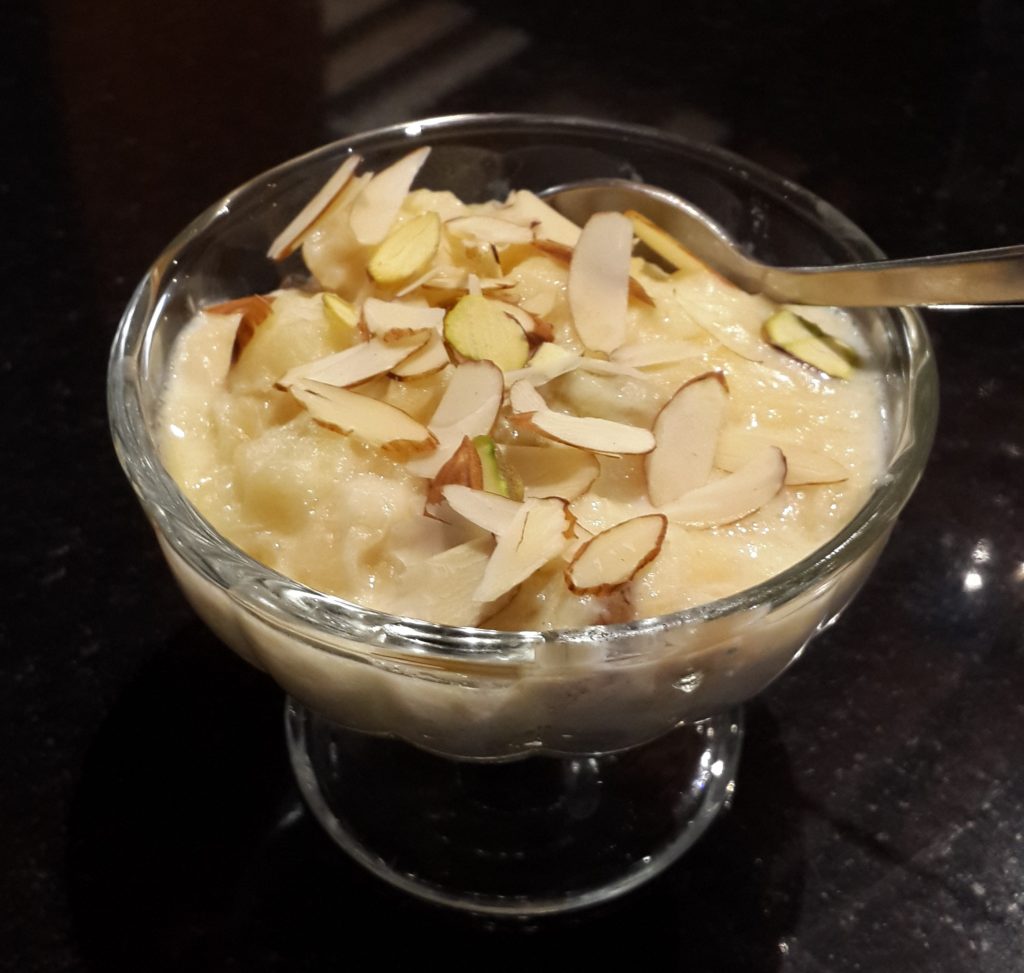 Basbusa or Basbousa: A sweet cake which is made with coconut, yogurt, semolina, eggs and almond topping. 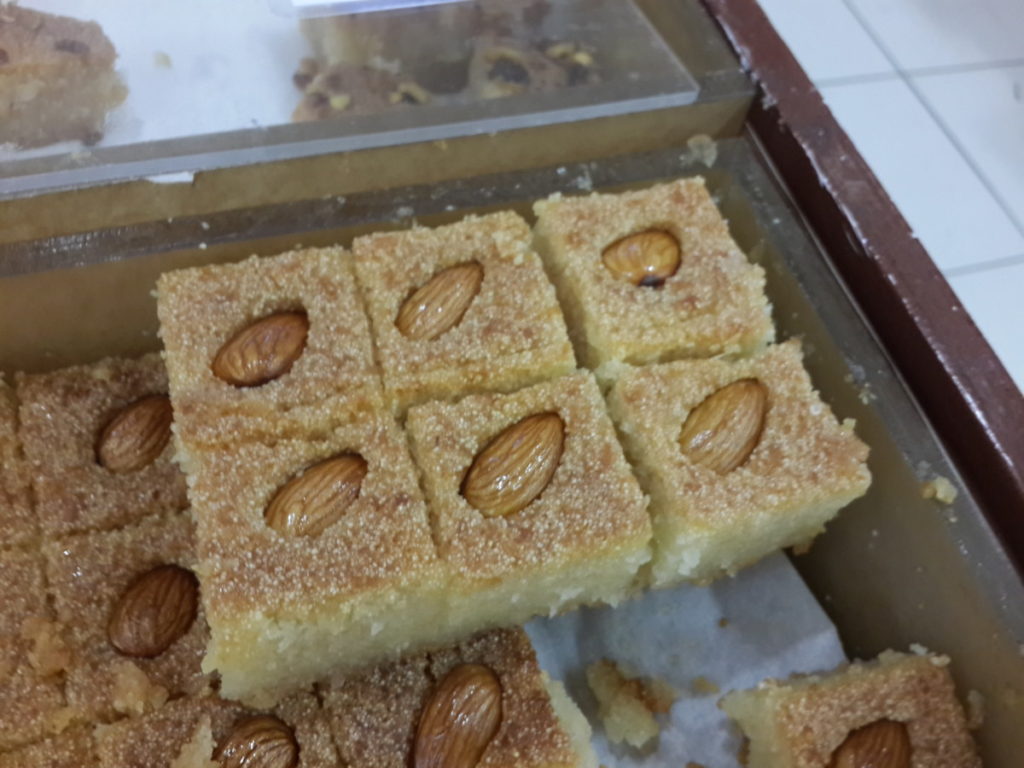 Baklava: A sweet pastry which has layers of paper thin dough filled with chopped pista, almond and other dry fruits and held together by sugar syrup or sometimes honey.

Many more items to be added onto this list. Please feel free to leave comments below…..