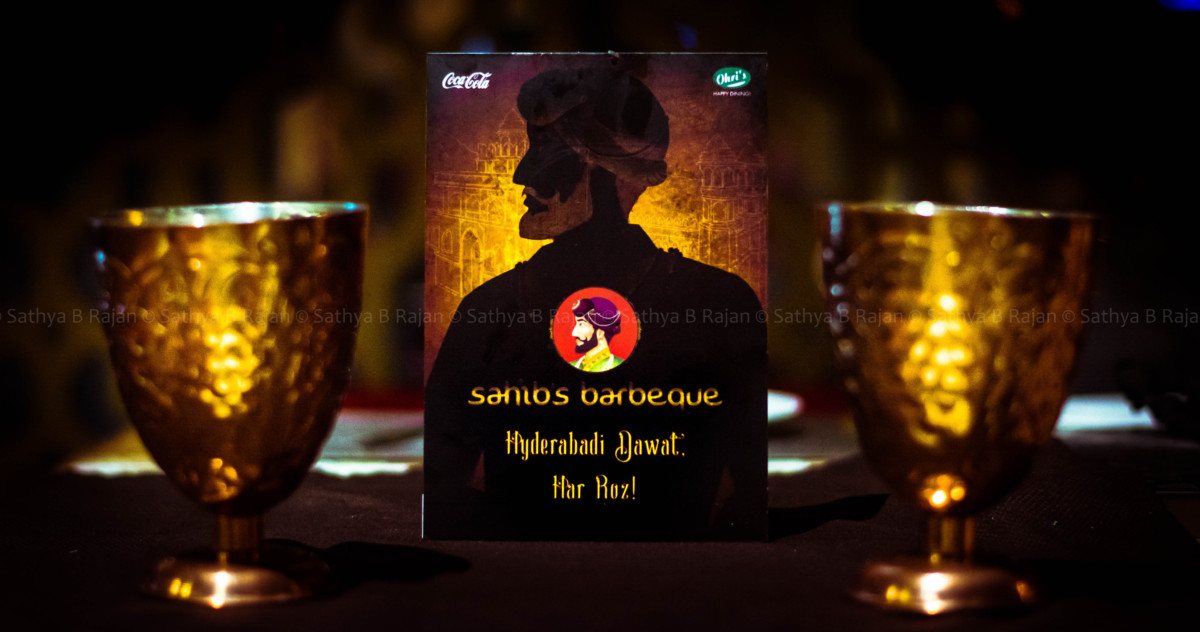 Ohri’s theme based restaurant’s are always a crowd puller and Sahib’s barbecue is no different. We jumped at the chance of doing an event here looking at the ambiance and the menu

Close to 45+ foodies descended down on a Saturday evening to savor their offerings which began with the iftar. People who were fasting were provided with a fruit basket with watermelon, pineapple, dates etc. Slowly the foodies started walking in and then things went into high gear

Sufiyana singers at the back belting out amazing melodies, the smoky smell of the barbeque all around, the loud discussion about the food and the constant running around of the management and the admins set the tone for a great event which followed.

Starting with the welcome drinks – We had the Litchi drink which unfortunately got over quickly and was replaced by Kiwi and both were refreshing.

Started with the Marag, the flavor was okay but it could have been better if it was spicy the way that is served across traditionally at the Muslim wedding. The chef was very eager to learn about different ideas on how to improve this and shows his commitment to bringing better food to the table

I am not a fan of mutton but enjoy it sometimes when it is made nicely and coincidentally I was offered Lukhmi as the first item on my plate. The first bite got me into pure ecstasy as the filling inside was minced mutton which was pan fried and was present from one corner to another. Every subsequent bite was pleasure and reminded of the lukhmi’s we used to have at weddings but this one been far better. Finished 4 pieces without batting an eyelid

Lucknowi tawa fish was served hot which was nice and tasty, but the talawa gosht was superb. It was the melt in the mouth type yummy. It went well with the Tauliya naan that was served on the table. The sight of the naan itself made everyone wonder if anyone can finish that much.

The Shikampuri kebab was bit dry but still flavorful, could have used a little more spice to add zing to it.

The Tangdi sikandari came out of the kitchen skewered on a sword(talwaar) and it was pipping hot and tasty. The murgh akbari kebab, Gosht gilafi sheekh and the darbari jhinga all three of which were on the barbecue were amazing in taste.

Moving to the main course

Dum biryani unfortunately was not that great. The taste and the texture of the rice lacked the biryani spice and smell. Possibility of keeping the biryani hot for too long might have played a part in this. All of the folks were concentrating on the starters and barbecue and went very late to check on the biryani. 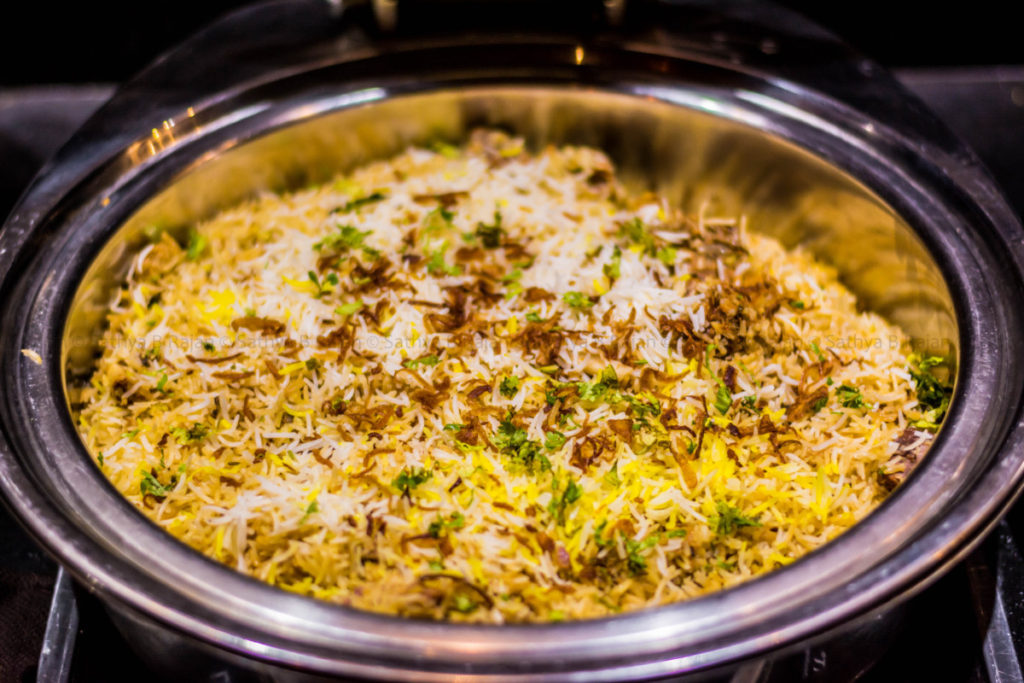 Next was the Haleem, this unfortunately was a miss in terms of taste. The spiciness was missing, flavor was not evident at all. It could have used a little more garam masala to kick it up a notch. Probably a bad day in the kitchen

Murgh dum ka and Ghost lazeez were the better choice for the main courses. The meat was well cooked and the taste was amazing.

Coming to the desserts section

I started with the Ice creams which everyone was raving about ” the guntur chilli ice cream” and the ” Paan icecream” . They were just amazing. The chilli effect only starts once the ice cream is going down your throat, the after taste is spicy and I loved it. The double ka meetha was better than expected. The jauzi halwa was okay, didn’t feel that it was that great.

Special mention to the number of pickles present at the buffet table. Tried all of them and loved each and every one. From Mango to lemon to gongura to chilli , everything was well made. 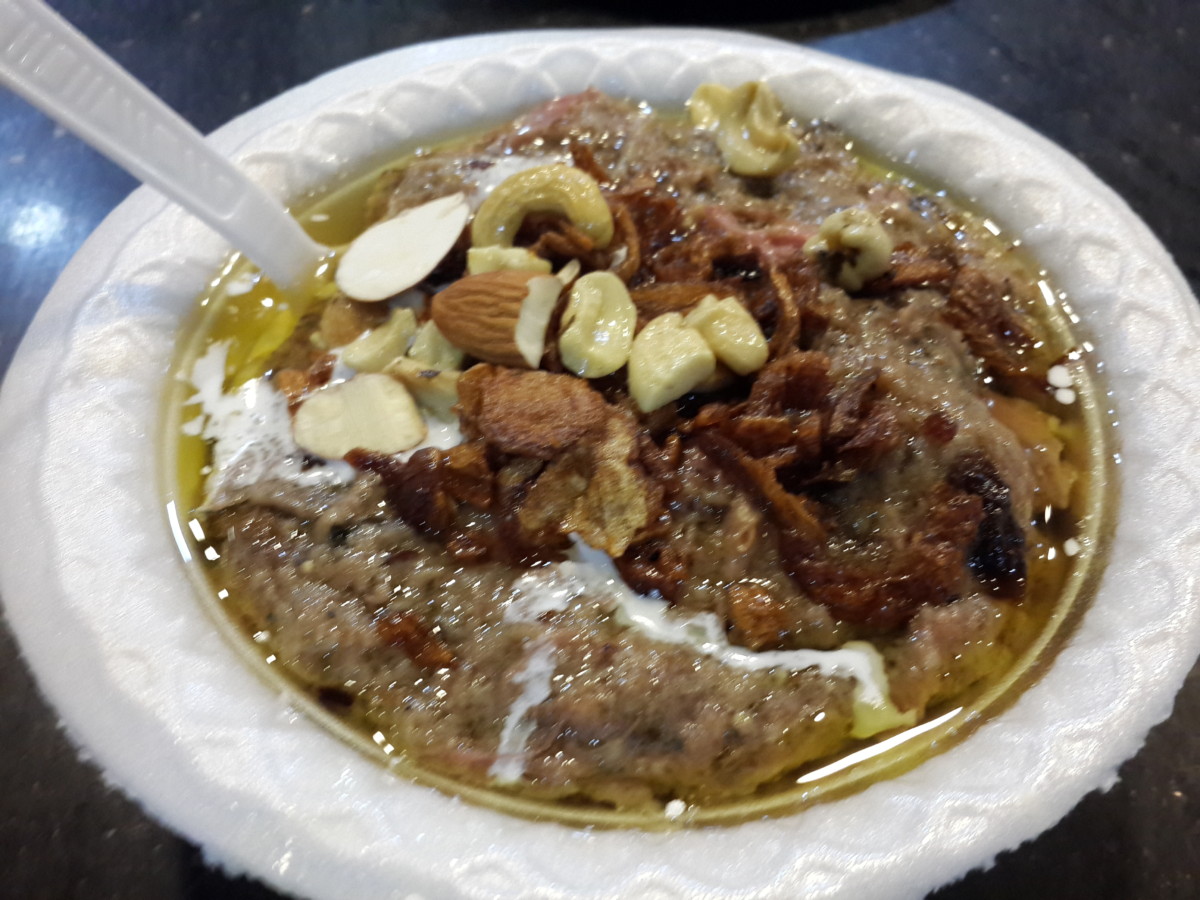 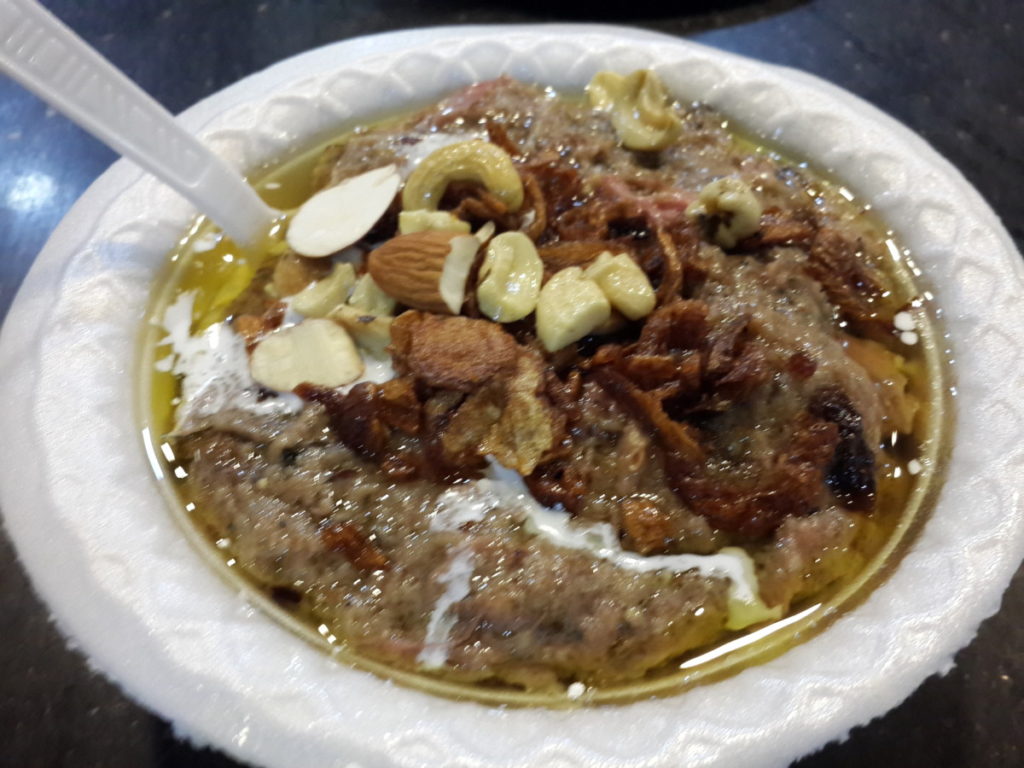 Mashhad(This is the actual spelling of the place) is a popular city in Iran and the word in Arabic means “place of martyrdom”.

Iran primarily has harees being served across during Ramadan and this Mashad available in Hyderabad also underwent the same transformation locally from harees to haleem as the normal Iranian haleem did.

Addition of Garam Masala powder with cardamom,cinnamon,black pepper pods etc. supposedly imported from Iran & most importantly boiled & soft boneless chunks of mutton are added almost at the end of haleem making process so that it doesn’t get mashed up into the wheat. This depends on vendor to vendor to make it spicy or bland

The addition of the above spices and the addition of ghee,cream along with fried onions, cashew-nuts,almonds,mint add a different flavor to it.

What to expect: If you like mutton then you would love this variant of haleem, very less amount of bones with good chunks of mutton.Be careful not to bite on the cinnamon or cardamom pods, the ones from Iran (In case if they do import) are of strong flavor and might ruin your taste. 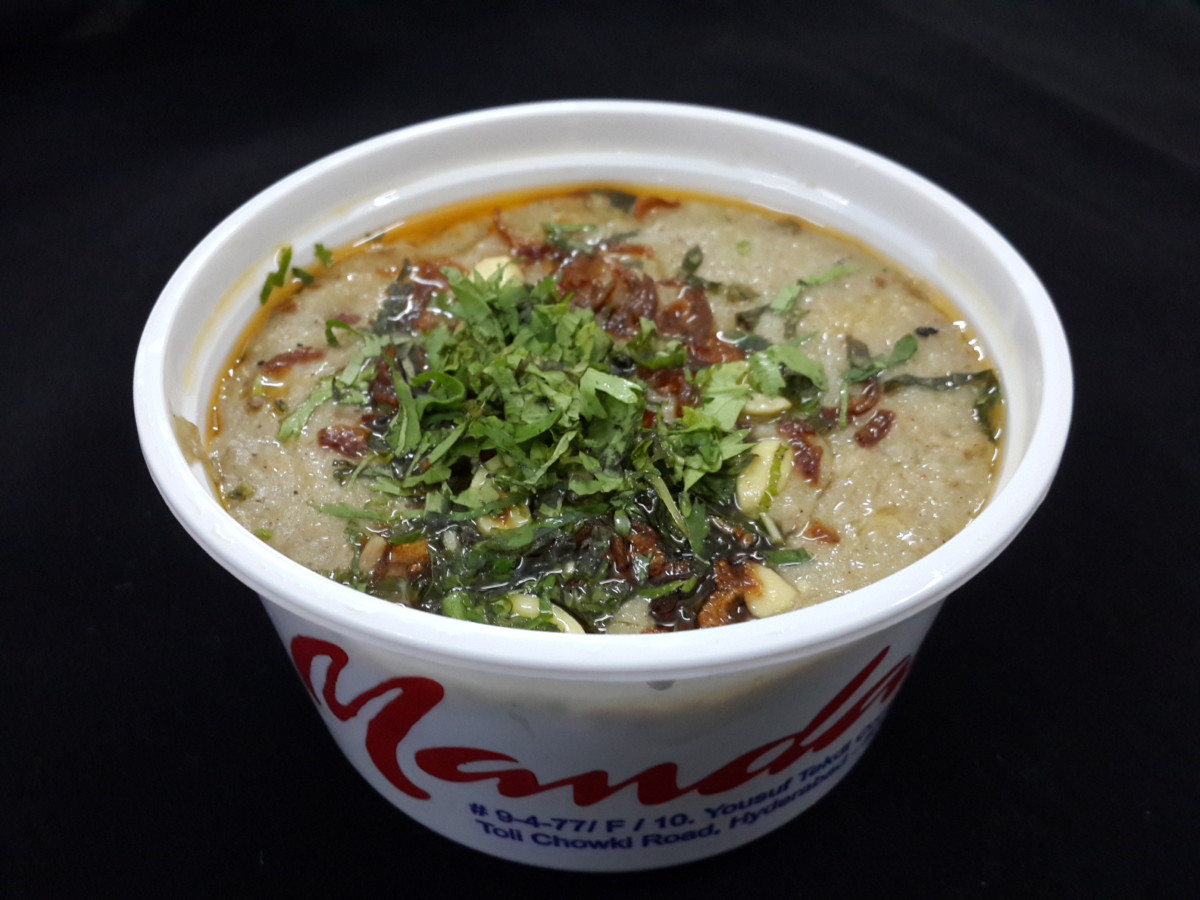 Confused as to the difference between them? Read on….
Harees: A meat and wheat porridge which is a popular Arab dish traditionally served during Ramadan season and during special occasions like weddings, birthday’s,anniversaries etc. 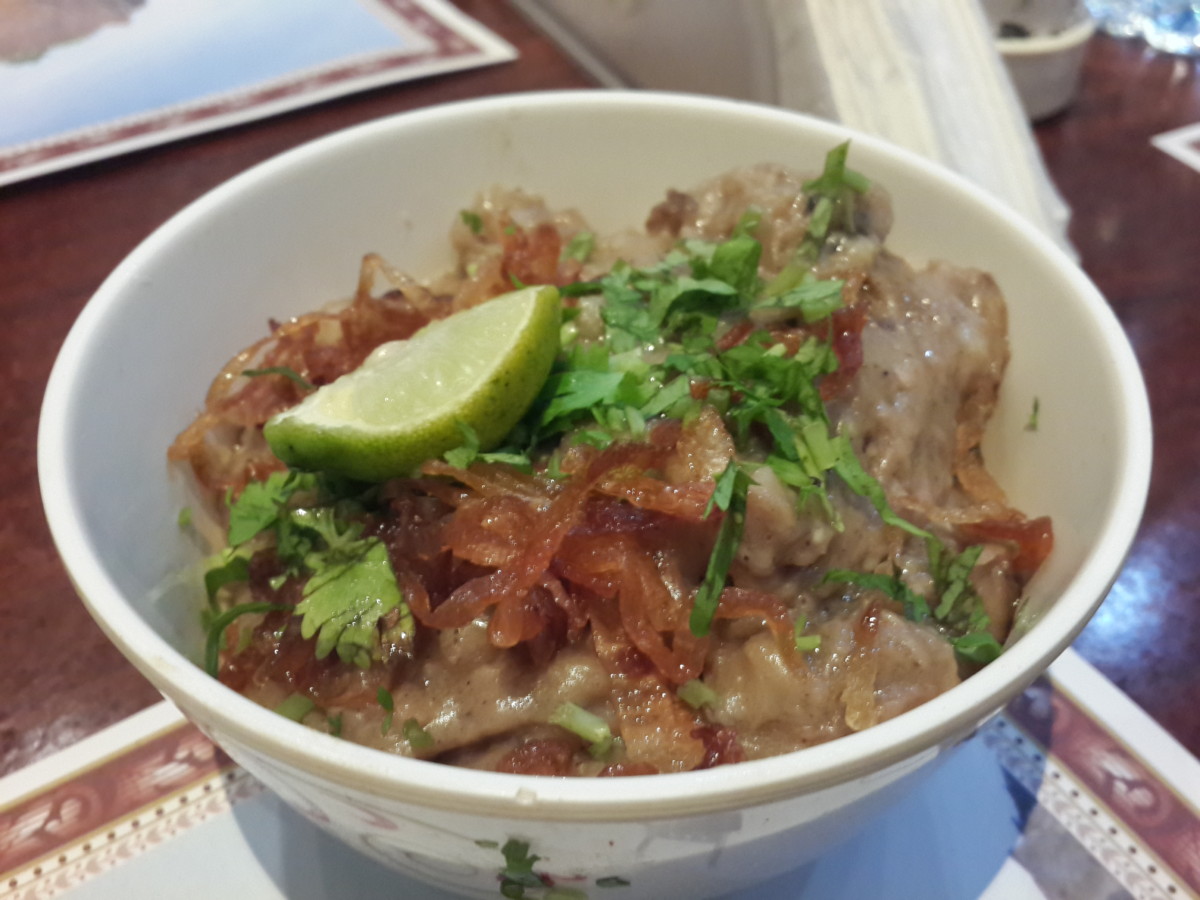 Golconda Paradise – When I first heard the name of this place it reminded of two places in Hyderabad. Golconda hotel and Paradise hotel and this place was no exception to the name as they served amazing food which was a blessing to my palate

Eating good food or trying new places doesn’t require any reason but this time it was a treat from my brother in law for his new job. Landed there for Dinner at 7pm and the place was half full but still bustling with activity as the take away guys appeared to be in full swing moving in and out at regular intervals.

The place by itself is a medium size outlet with an inside seating which can accommodate 40-50 people , there are tables on the outside as well which can handle 10-15 more. Based on the weather the outside seating can be a good option to choose

Ambiance is well lit up, with sofa style seating at one side and wooden chairs on the other.

We were quickly seated and got handed the menu card. First thing that caught my eye was the Haleem which is available on Thursday and Friday. Quickly checked with the waiter and got the good news that it is available. Asked the waiter to first get us Haleem while we scour the menu for the other dishes to order. 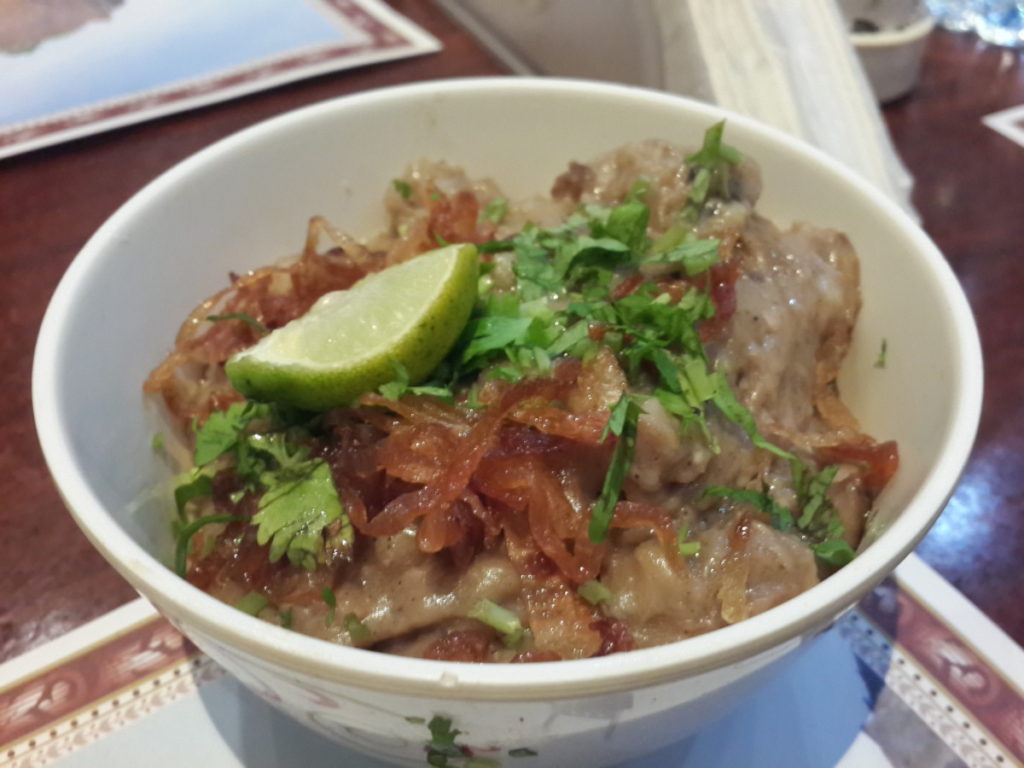 Haleem is a dish quite popular in Hyderabad during the Ramadan season. A traditional wheat & mutton delicacy which takes a long time to make and quite nutritious. The traditional style of making it takes 10-12 hours at least to get the thick consistency. When it is ready they keep it on low simmering charcoals to keep it warm.

We got our haleem dish in few minutes while we were still discussing our order. Haleem turned out to be amazing, right amount of meat to wheat ratio, consistency, color, taste was to the point.

Decided to order Chilly fish, Chicken tikka lababdar, loose prawns along with tandoori roti and end the meal with some chicken biryani.

The starters were all wonderful Chilly fish being the favorite and loose prawns was a close second. The main course of Chicken tikka labadar was supposed to be different dish altogether, however didn’t find much difference in taste to the chicken tikka masala that I am used to eating. It was still tasteful so it didn’t matter much 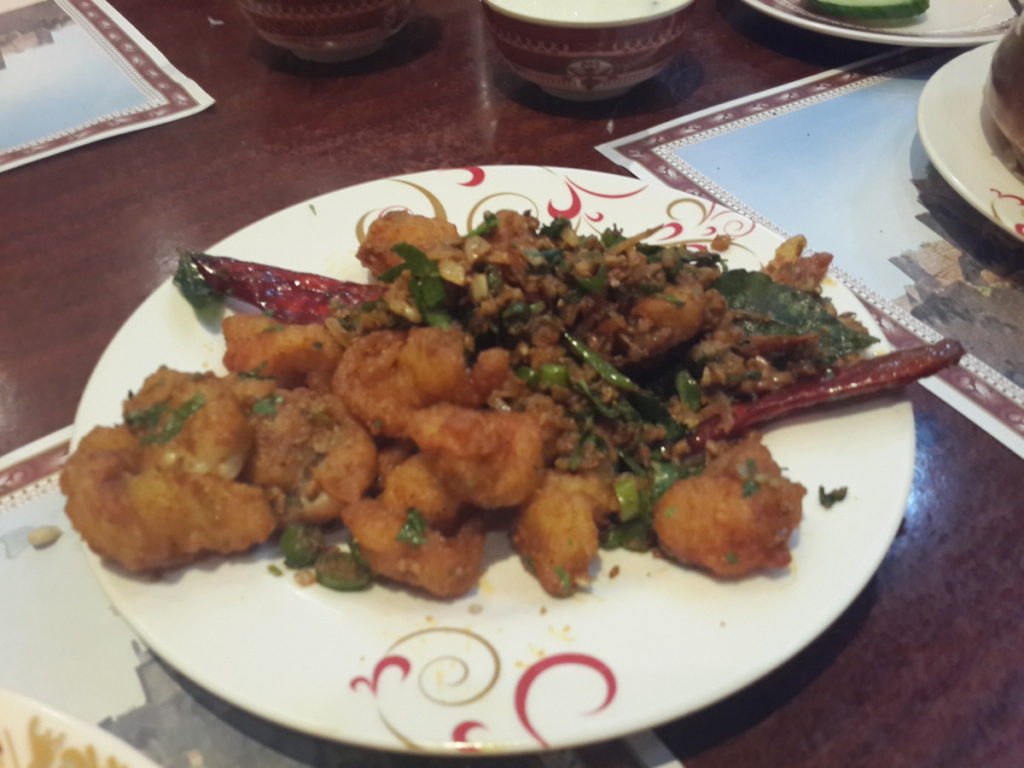 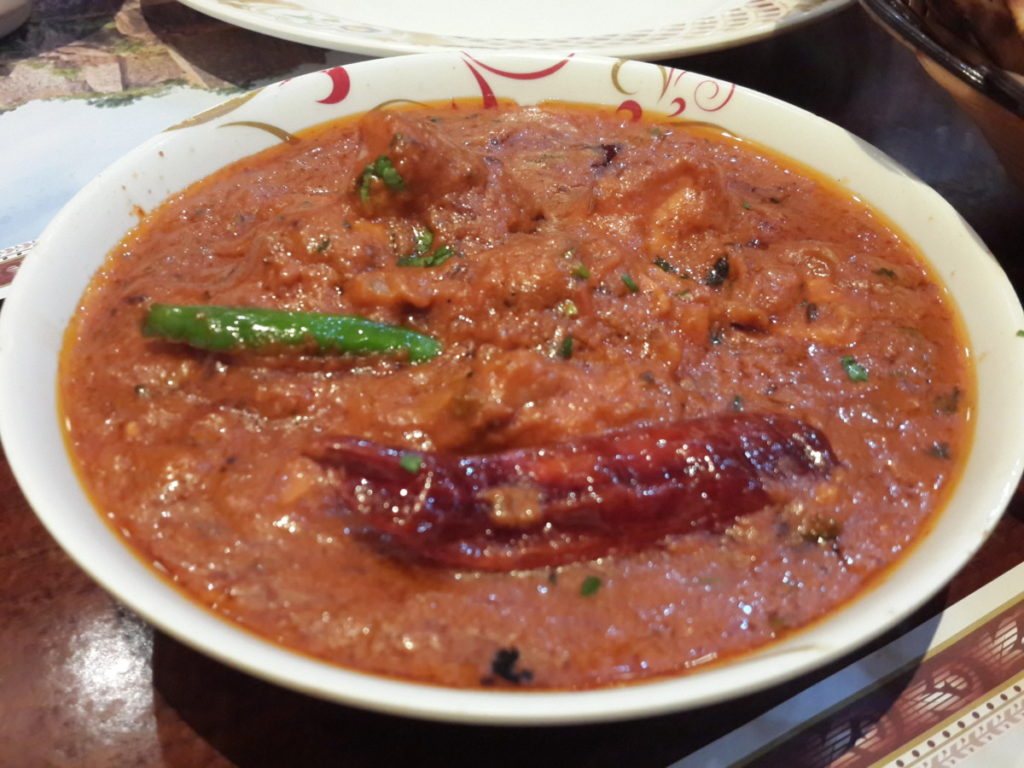 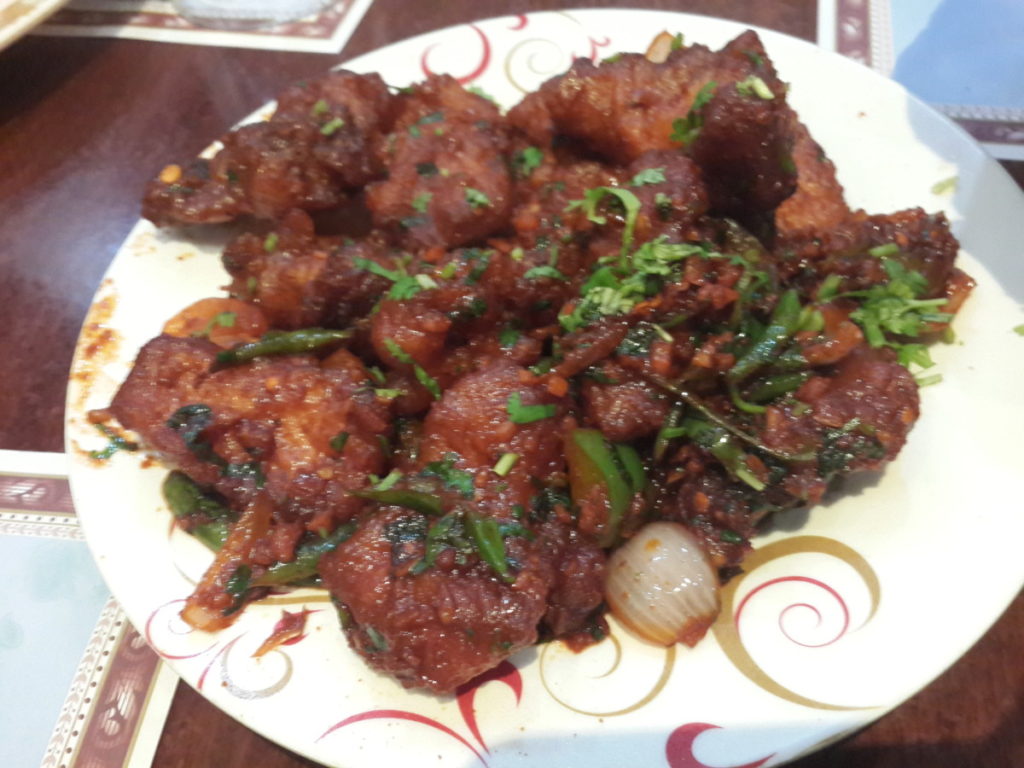 Biryani was the surprise element at the end, what they serve here is very similar to the ones that we get at Muslim weddings in Hyderabad, India. Amazing taste along with soft tender chicken marinated to perfection 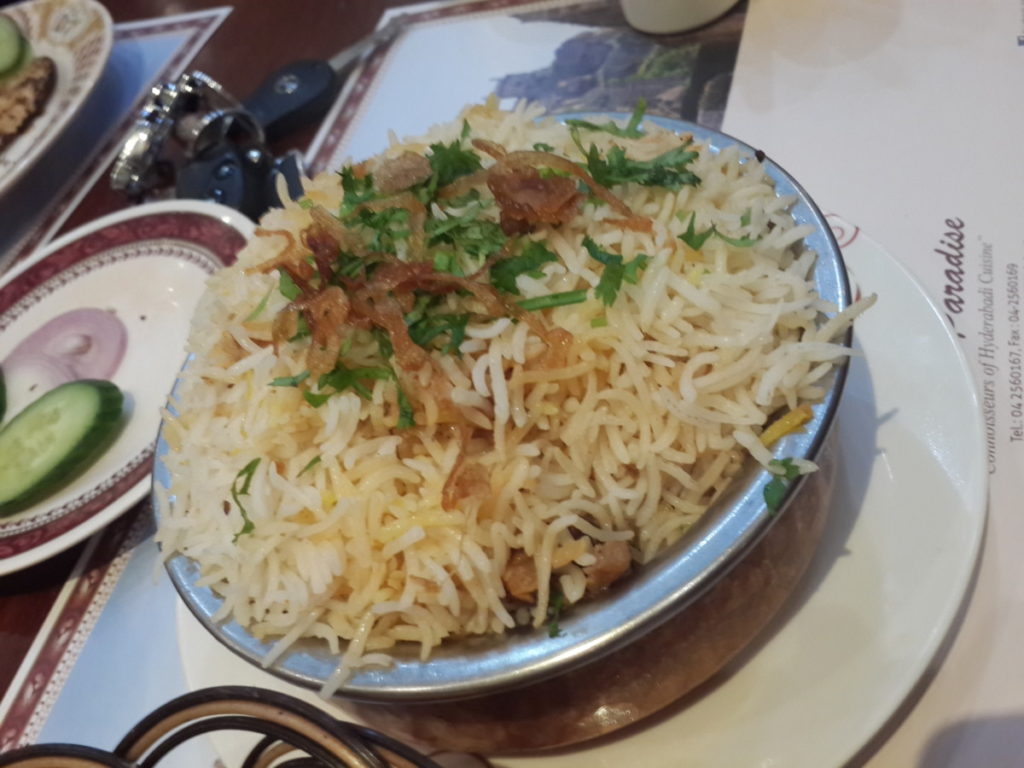 Overall a great place to have Biryani and Haleem – Hyderabadi iStyle